Ion exchange resins are materials widely used in many fields of chemistry. They are absolutely fascinating because, thanks to the fact that they exchange ions with the current they treat, they allow us to purify it or carry out a chemical reaction. In this bulletin we want to explain how resins are formed, what their operation is based on and what are their main industrial applications.

In 1935, two chemists, B.A. Adams and E.L. Holmes, at the National Chemical Laboratory in Teddington (UK), synthesized the first ion exchange resin, a phenolic resin. Since then, the technology of resins has developed extraordinarily.
An ion exchange resin is made up of a framework and a functional group.
The framework is obtained by polymerizing monomers. After, a crosslinking agent is added to give the polymer greater physical strength.
Once the polymer is obtained, the following step is the addition of the functional group, which can be acidic or basic.
For example, to obtain a strongly acidic cation resin, styrene is reacted with divinylbenzene (crosslinking agent) to obtain the framework (styrene-divinylbenzene). Subsequent reaction with concentrated sulfuric acid allows to obtain the strongly acidic cationic resin whose structure is shown below: 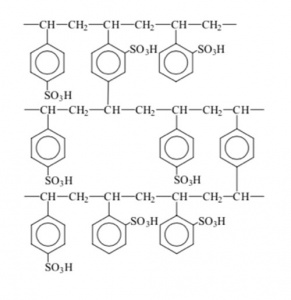 The structure of a strongly basic quaternary ammonium anionic ion exchange resin is as follows: 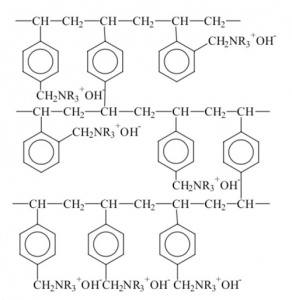 The resins are manufactured in spheres of sizes that vary between 0.3 to 1.2 mm, and, varying parameters of their manufacture, the microporous structure (or called gel-type) can be obtained, whose spheres have an internal structure like the shown below: 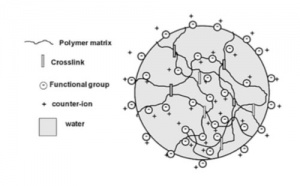 Or we can obtain a macroporous structure, with a pore size, and its spheres have this type of internal structure: 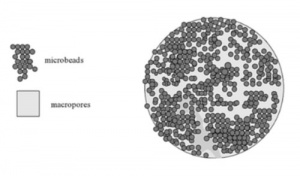 Microporous or gel-like resins do not have discrete pores therefore solute ions diffuse through the particle to interact directly with the exchange sites.

Macroporous resins offer a large effective surface area (certain resins have a surface area greater than 1000 m2/g) so that they facilitate ion exchange and their spheres are more rigid, facilitating the separation of the reaction system.

Taking into account the type of functional group they present, resins can be classified into the following types:

The appearance of the resins varies depending on their composition, from colors from light yellow to black, going through the whole range of browns. They are always supplied wet because they are very hygroscopic and to protect them during transport. Before its first use, this water that they contain will  be displaced with the solution to treat or can be dried. 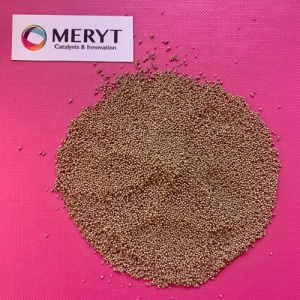 The operation of ion exchange resins consists of exchanging the ion of its functional group for the ion present in the solution, which needs to be eliminated. Depending on the type of ion to be removed, one type of resin or another will be used.

For example: in the case of water treatment, to eliminate Mg + or Ca ++ cations, we can use a strongly acidic cationic resin, so that the cations to be eliminated are exchanged for the H + cations of the resin, being retained by it.

It may happen that the resin acts as a catalyst, in this case, it gives up the acidic proton for the reaction to take place, but recovers it, so that the composition of the resin does not change.

The resins are installed in fixed beds through which the solution to be treated is passed. When the resin loses its ionic exchange capacity or is exhausted, a regeneration is carried out, making a regenerating solution pass through it, with the original ion that corresponds to it. This ion binds to the radicals in the resin and displaces the ions retained during normal operation. The most commonly used regenerating solutions are hydrochloric or sulfuric acid, caustic soda or a sodium chloride solution.

To remove bicarbonates, if present, weakly acidic cationic resins are used, in the step that is called dealkalinization. The treated water contains carbon dioxide that can be removed with a degasser.

When deionized water is required, all the ions are removed from the water thanks to the use of two resins: the water passes first through a cationic resin in the hydrogen form and then through an anionic resin in the hydroxyl form. Therefore, all cations are replaced by ions from the cation resin and all anions by ions from the anion resin, which recombine to form new water molecules.

2. Ion exchange resin as a catalyst
Resins can act as catalysts in various chemical reactions. The reaction in which they have been most used for more than 30 years is for  the production of ETBE and MTBE, octane improvers in gasoline. But resins are also used as catalysts for the following reactions:

Condensation: to obtain bisphenol A, by reaction of phenol and acetone

Esterification: to obtain dimethylmaleate, by reaction of maleic anhydride

Alkylation: to obtain octylphenol, by reaction of octane and phenol

In these cases, each reaction is carried out under specific conditions of temperature and pressure to obtain maximum performance and selectivity.

3. In the food industry
Ion exchange resins are widely used in the food industry, especially in sugar production. They are also used to demineralize whey, juices, beverages, and other foods, improving colors and odors.

4. In the pharmaceutical industry
The resins have various uses in the pharmaceutical industry. They are used to formulate prolonged-release medications, adsorbing the active ingredient on the resin, which is released in the body over the time. They are also used in the purification phase in the manufacture of different antibiotics and to improve the taste and smell of some medicines.

5. In nuclear power plants
Especially important is the application of ion exchange resins for the treatment of the different water circuits of nuclear plants. In these cases, different resins are used to avoid any type of corrosion and to treat the nuclear isotopes that must be eliminated.

6. Other applications
The resins are used in the biodiesel production process (FAME), in its purification stage, to remove free glycerin and moisture.

Other processes in which ion exchange resins are used are the following: chromatographic columns, phenol production, chlorine and soda production, purification of hydrogen peroxide, removal of aldehydes, uranium extraction and metal recovery (interesting the recovery of gold in jewelry).

As can be seen, ion exchange resins are very versatile materials that have multiple and very diverse applications and that help us a lot in multiple processes.

We hope this newsletter has been interesting for you. Until next month!

The beauty of silica gel