Molecular sieves: the art of separating according to the size of molecules

One group of adsorbents that is especially exciting are molecular sieves. These materials are characterized by a perfectly designed crystalline structure that allows us to separate molecules according to their size, as these adsorbed in the pores of the molecular sieve that we use.

The base crystalline structure is a zeolite, a silicate alumina whose crystallographic structure consists of tetrahedrons of AlO4 and SiO4. In one of its manufacturing stages, crystallization, water is released, forming the different pores that acquire affinity to adsorb molecules. Thanks to the presence of different cations such as sodium, potassium and calcium and a very high surface area, of around 900-1000 m2/g, it is possible that molecular sieves adsorb large amount of water and other substances that we want to separate.

What types of molecular sieves exist?

Let’s see one by one:

Molecular sieve 3A corresponds to a pore size of the crystalline structure of 3Å.

It is obtained by replacing sodium ions in the molecular sieve structure of 4A (sodium form of zeolite type A) with Potassium ions, so that the effective pore size is reduced to 3Å. 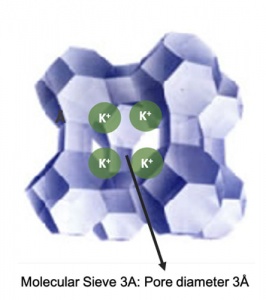 It is used in the removal of water from ethanol and methanol, as well as in the dehydration of unsaturated hydrocarbon streams such as propylene, butadiene, acetylene, cracked gas, etc. It can also adsorb both water and ammonia in nitrogen and hydrogen streams.

Molecular sieve 4A corresponds to a pore size of the crystalline structure of 4Å.

It is type A zeolite in its sodium form: 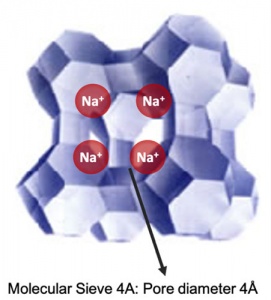 From this form, sieves of pore sizes 3Å and 5Å are obtained, exchanging sodium ions for Potassium and Calcium ions, respectively.

It is also used for the removal of water from closed liquid or gas systems, e.g. in packaging chemicals, electrical materials, etc. Used also to dry both polar and non-polar media. Regarding other molecules, it adsorbs: H2S, SO2,CO2,ethylene, ethanol and propylene.

Molecular sieve 5A corresponds to a pore size of the crystalline structure of 5Å.

It is obtained by replacing sodium ions in the molecular sieve structure of 4A with Calcium ions, so that the effective pore size can be increased to 5Å. 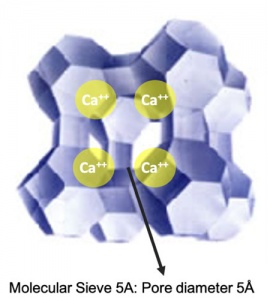 It is used for the elimination of CO2,CO, H2S and other weakly polar molecules, in natural gas, thanks to the strength of divalent calcium ion. It is also used in the separation of normal paraffins from branched paraffins and cyclic hydrocarbons, for example in the manufacture of LAB (linear alkyl benzene).

The molecular sieve 13X corresponds to a pore size of the crystalline structure of 10Å.

It is the sodium form of zeolite X, whose pores are larger than those of zeolite type A (the molecular sieve of 4A). 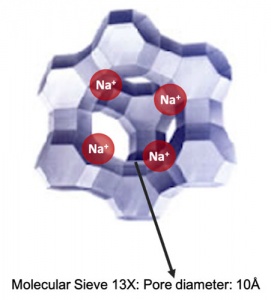 It is used to separate nitrogen from the air for high purity oxygen. It is also used to hairdryer and remove H2S in natural gas and LPG and remove CO2.

Other less common types of molecular sieves are Molecular Sieve 10X, which has a pore size of 8A and is used for the drying and desulfurization of gases and liquids and separation of aromatic hydrocarbons. We can also find more specific molecular sieves designed on other zeolites.

Molecular sieves are available in various shapes, and size of their particles, being the most common forms spheres and pellets. The spheres have several advantages such as that their load density is higher than pellets, so in the same volume we load more product, extending the life cycle of the adsorbent. Also, because they have no sharp edges, they are more resistant to attrition, which results in less fine formation, avoiding increased pressure drop in the bed.

The different  molecular sieves are obtained from the synthetic zeolites 4A  (zeolite A)  or 13X  (zeolite X), being their respective manufacture very similar, varying only the mixing speed of the components.

For the manufacture of 4A synthetic zeolite, the components Al(OH)3, Na2SiO3 solution  (soluble glass), NaOH and water are used. The manufacturing stages consist of the preparation of these materials, mixing, crystallization, filtering, washing and drying, obtaining zeolite 4A powder.

The production process of synthetic zeolite powder 3A and 5A, is very similar to that of synthetic zeolite 4A. Once the size 4A crystals are obtained, an ion exchange is performed with a KCl solution or with a CaCl2, solution, in order to obtain the 3A or 5A molecular sieve, respectively.

To manufacture the molecular sieve from the corresponding zeolite, a binder is added to the zeolite powder, and then pelletized and calcined, obtaining the finished product. The binder can be a kaolin clay or a clay of atapulgite, sepiolite or bentonite.

There is the option to produce “binder free” molecular sieves, i.e. without binder, so that the binder is replaced in the last stage by more zeolite. This option increases the adsorption capacity of molecular sieve.

Depending on each unit and on each molecular sieve, the operating conditions will vary. Generally, molecular sieves have long life cycles, if their correct operation and regeneration conditions are very well respected.

From MERYT we can supply you with all kinds of molecular sieves that you need for any of your units, as well as attend you any questions you may have regarding these very interesting adsorbents. It will be a pleasure.

We hope this technical bulletin has been of interest to you.

Until next month,  best regards!

The Key Role Of Catalysts